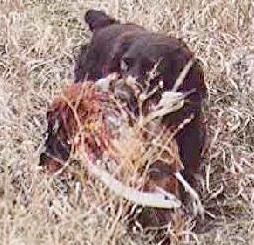 " Round #2 "
By Howard Nichol, Brentwood, Tennessee

I had let the two Boykins out of the pickup and they were running around in the grass behind the filling station. As I watched them go about smelling every dog smell they could find on every bush, pole and tree, I could not help but marvel at what great little versatile hunters these 2 year old Boykin Spaniels had become. Behind that gas station they were just two pet dogs airing while traveling with their master. But slip on the lanyard of a Acme Thunderer whistle, put on a hunting vest, grab a shotgun, and these attentive liver colored spaniels come alive. In truth, they spring to a level of excitement known only to other well trained hunting dogs and the men and women who hunt with them.

Damon and I had hunted central South Dakota with Dolly and Brownie last year when the dogs were 1 1/2 years old. Except for running birds, the dogs did a beautiful job for us. We came home with near our limit of pheasants. Their retrieving work was outstanding but, the one thing I had not considered prior to that first trip was to train them to stop or "call off" a running bird. So, we found, during our first day of hunting, we were in for trouble on those wild running ringnecks. By the end of our 5 day hunt last year, I was able to gain some control of both Dolly and Brownie on runners. If however, I let the Boykins get very far out front prior to blowing the stop whistle, they would be off to the races.

The first thing we did when we returned from last year's hunt was go back to my favorite training grounds "Pheasant Creek Hunting Preserve," owned and operated by Jesse Dunnaway. Pheasant Creek, just outside Nashville, TN, is where the dogs and I conduct most of our training. Last winter was no exception. With Jesse's help we set up each dog on the trail of running pheasants until no matter when or where they heard that single whistle, they would sit their little fanny down and wait to be released. The training was invaluable. This year we knew a lot more about running birds. Not once did either dog fail to stop and sit when commanded while after fast runners moving out of range. And, there were cases where two or even three birds ran from the same area. Even with that added excitement, each dog would sit and wait for me to release her to again pick up the trail and take up the chase.

So it was with this training background that on October 30th, Damon, Dolly, Brownie and I arrived in central South Dakota ready to test our hunting skills on those clever ringnecks once again. Last year the weather was mild with no snow cover. This year was essentially the same but the excessively wet fall season meant that very few crops had been harvested. Any one who has hunted in standing corn knows the scenario. Boy, it is tough to get those birds airborne within shooting range. If the dog gets a flush within shooting range, can you get a shot off through the stalks? If you get a shot off and score a hit, will you ever find the bird?

Damon and I enjoy hunting together, and he enjoys watching the dogs work as much as I do. So, we very rarely use a blocker at the end of a field. We just take what the Boykin springs up for us while walking together. We found that for both of us to hunt inside a standing corn or sunflower field was not successful. So we worked the edges. Damon would walk the fence row slightly ahead of the dog and me. I would go into the field several rows and work the dog from there. Even then, it required a lot of whistle toots to keep the dog close enough to see and still cover as much ground as possible. Of the 10 birds we bagged using this method, Damon shot 8 (the guy in that tall corn had trouble getting a good shot off).

Damon shooting the birds proved the most successful anyway. Since a shin high dog is not going to mark a bird down in 7 foot corn, Damon was able to mark a good line to the bird for us. He would direct the heeling Boykin and me to his mark. I would then release the dog to "hunt dead". Considering the standing crops and the fact that so many of our downed pheasants proved to be wounded runners, the dogs literally saved one half our game (we lost only one bird). As much as I love watching these Boykins quarter out front and flush, I credit their strong retriever instincts for the fact that we found all but that one pheasant. When you ask them to "hunt dead" or send them on a mark or blind retrieve, they won't quit until they come back with a bird. This was especially important here because nearly all birds were down out of our sight or, if wounded, had run from the area of the fall. The Boykins, once sent to retrieve, would quickly move into the cover. They were virtually on their own to pick up the scent, follow the trail, recover the bird and then navigate back. Even though we had worked so hard in the off season to master that "call off" fast runners, it was that Boykin retrieving drive and refusal to quit that made this year's hunt such a success.

The last bird shot the second day, although not in standing crops, was a great example. We were working a low area 60 feet wide with a small ditch running through the middle. There was a corn field on the left and a fence and open pasture on the right. The wind was blowing 15 to 20 miles per hour from the open pasture side and laying the 3 foot tall CRP grass over at a 90 degree angle. I was having to pick up and put down each foot on every step like walking over low hurdles just to make headway. Dolly, my 38 ponder and larger of the two Boykin littermates, was bounding, pogo stick style, to get through the grass and cover the area out front. About half way through this CRP jungle, Dolly started a turn back from my left side into the wind. Two bounces into the turn her head swung hard right and down while she was still in mid air. As she hit the ground, her 3 inch tail changed from that constantly oscillating windshield wiper to a V shaped blur. She immediately disappeared under that low canopy of cover. Within seconds, a beautiful cock blasted straight up from under the grass with Dolly launching straight after him. Even with a waist high leap, the dog missed but came down, sat and glued her eyes on the catapulting cock. I shouldered my Remington 1187 and popped off a round just as Damon let go with a blast from his Auto 5. The bird folded and crashed down 20 yards in front and off to our right. I looked down at Dolly. Her eyes were locked on the grass where the cock had disappeared. With the command "Dolly", off she charged, across the ditch and to the marked area. To my surprise she disappeared into the grass at the point of the bird's fall but came out with nothing. She started to expand her search and after a few minutes headed off further to the right. She seemed preoccupied with that area and not the spot of the fall. She still, however, came up with nothing. Certain that the bird was right there, Damon and I crossed over the ditch and started kicking around in the tall grass ourselves. I called Dolly back and gave her the "hunt dead" command at this original mark. She still found nothing. I couldn't believe the pheasant was not there when we all had seen it fold so completely and marked it so well.

Damon and I had just about decided to give it up for lost and go back to hunting when I looked down at Dolly. She had stopped working where I had directed her and was sitting facing me. I'm not sure how they do it, but there is, at special times, a way your loyal hunting buddy does communicate with you. On this occasion, Dolly was looking at me with those piercing yellow eyes saying, "If you are finished, will you let me find that bird now?" So I used her favorite command and said, "OK Dolly, go FIND EM." Off she dashed right back to where I had called her from 10 yards to our right side. Damon and I followed her over to this tangle that was so thick and laid over that Dolly's hunt took her out of sight once again. We could only see the top of the grass move as she snorted around under the canopy in search of that elusive bird. Within 30 seconds of her working this area, I saw a flash of turquoise and copper, to Dolly's right. That wily bird, laid out low and straight, shot like a torpedo from one thick area through a thin spot to another jungle of grass. Dolly had finally locked in on the pheasant and flashed through the same opening. Within seconds she reappeared with the kicking bird. She heeled to my left, looked up and waited for my "Give" command. It sure seemed to me she was saying, "You stick to the shooting, boss, let me do the retrieving." At the local restaurant each evening, we heard the repeated stories of pheasants shot but lost in those unharvested fields. We were always proud to report (only if asked, mind you) that we had lost just one bird, total. The next question would usually be, "Well, you guys must be using big time retrieving dogs. What are they, Labradors or Chesapeakes?" "No," we would say, "Spaniels, Boykin Spaniels. But Labs and Chessies are pretty good retrievers, also!"

You can reach Howard by e-mail at: boykins2@aol.com

To be a part of the Boykin Spaniel pages, contact Pam Kadlec:
pam@boykinspaniel.com