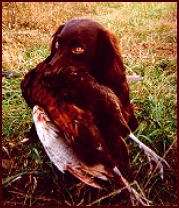 "A week of learning, a week of fun"
By Howard Nichol, Brentwood, Tennessee
Published Spring, 1996 in Spaniels in the Field magazine
Editor/Publisher - Arthur R. Rodger

Looking back into the cap-covered pickup bed to check on Catherine's Little Brownie and Catherine's Dolly once again, I couldn't help but wonder that instead of heading home out of Sioux Falls, South Dakota, what would I be doing early this November morning had I not visited Nancy Boykin in Swanee, Tennessee a year and a half earlier. Nancy, the wife of the late Sam Boykin of the South Carolina family who developed the Boykin spaniel, had sold Dolly and Brownie to my wife Catherine and me for what we thought would be great little house pets. I had become acquainted with a Boykin while hunting with a friend. The little guy was energetic outside and had great in-house manners. I suggested to my wife that, if she wanted a pet, this breed might be worth looking at. Nancy sold us on their immense desire to please. The end of May, 1994, we arrived home in Nashville, TN with seven week old Dolly and Brownie.

Now a year and a half later, my nephew Damon Cappy and I are heading out of South Dakota after 5 days of hunting with 28 pheasants and one sharptail grouse in the cooler. Obviously Dolly and Brownie didn't stay just house pets. In fact at 7 months old, after 3 hunts on wild quail, I introduced them to chukar and pheasant at the Pheasant Creek Hunting Preserve. Pheasant Creek, owned an operated by Jesse Dunaway, has been a blessing for our two little girls. Last winter the dogs and I spent many days, mostly week days when I could get free, springing up the left-overs from the weekend hunts there. The pheasants especially, after a few days back in the bush, react much like wild birds and were good training for the dogs. The one thing Pheasant Creek did above all else, was to turn the young Boykins into bird-crazed hunters. Not having ready access to pigeons, we did a lot of quartering and retrieving training there too. It has been my primary bumper/dead bird/live bird training area. But it was the work with pheasants that allowed me to take these two young spaniels to South Dakota with only minor apprehensions. I was confidant in my dogs' abilities with those clever creatures that are a far greater challenge on the ground for the dogs than for the hunter in the air.

We arrived in Miller, SD, on the Saturday before Thanksgiving. Tough is the word I will use to describe the conditions. Not inclement weather, but the lack of it was our problem. It was sunny, temperatures in the high 30's with no snow cover. The first dog out of the box was Dolly. At 38 pounds she is the larger of the two littermates, and the hardest driving. The first two times she made contact, she took off so fast and so suddenly that by the time I blew the whistle she was long gone. Both times, from a football field away, she answered the come-back but not without procrastination. After a heart to heart talk about not following whistle commands, we moved over to another CRP field with much shorter grass to assess what was happening. There we found the answer. Damon and I had just started to hike up over a ridge bordered by a harvested sunflower field on one side and a creek on the other. Dolly shifted her tail into overdrive and circled back behind us. I tooted for her to come on and start to quarter out front, but stopped and just watched as I realized she was on to something. I could see the flashing of her short tail and her shoulders as she worked the area frantically. Then she took off again, past me on my right side. For the first time I realized what we were going to be dealing with the most of our five day hunt, and that was running ringnecks. A good twenty yards in front of Dolly was a blur, a trail of tall grass moving at break-neck speed, and Dolly was in hot pursuit. I hustled up to the crest of the ridge just slightly behind the dog in time to be in position as Dolly closed the distance and put the bird in the air. It was a nice cock, and with the second shot he went down. Dolly nailed the mark and brought him back in great condition. I later had him mounted because of his 26-inch tail and beautiful colors. It was our first wild ringneck!

Back at Pheasant Creek, the pen-raised birds generally don't run. If they do, it's not far or fast. Either way, the Boykins push the long tails quickly and they most often flush within gun range. But here, this week, these wily birds ran and then ran some more. So we found ourselves on our 5 day hunt with 2 hard charging, quick trailing young spaniels but neither one schooled in being "called off a runner." As the week passed however, Damon and I became more proficient at getting the most out of the wonderful flushing abilities the dogs do have. If we were working a fence row or road ditch, we would set up a blocking shooter at the end. If we were working open fields, I would keep the dog's quartering pattern much closer than usual. This allowed us to move up with a trailing dog and be there for a shot if the Boykin closed and flushed the bird quickly. It also kept me near at hand where I could call them off a fast runner that was heading out of range. By the end of the week both Boykins were answering the hup whistle on runners quite satisfactorily. On some occasions we would keep a dog at heel up to a birdy looking area of cover, position ourselves for a clear shot, then release her to hunt. Busting the Boykins in fast on likely areas produced quite a few birds.

Our last day was interesting in that is was the same sunny warm conditions but quite windy. The elements combined to create a formidable task for both dogs. The birds were running big time, not sitting at all, and the wind was mixing up the scent in the CRP grass like a whirlwind. It was actually enjoyable to watch both dogs, each in her own turn, work and work on hot spots and at times come up empty, but still trying to make a trail in the jumbled wind blown mess. The dogs' retrieving work this day was exceptional also. On two occasions we barely winged a bird and each time the long-tailed beauty got up in that wind and sail out of sight. These were long retrieves after wounded birds that ran once on the ground. Wanting to get the dog there fast, before that wind washed away the fly-in scent, I could only give the dog a line, send her, and hope for the best. Both times it took awhile, but each dog came back with the bird.

The last bird of that last day was Brownie's. It was one of those flush, shoot, and retrieve pictures that one never forgets. The wind had died down a little and we were working a quarter section of freshly picked corn. Brownie, my smaller, a bit more timid, 31-pounder, had the duty. She flushed a nice cock sitting tight in a pile of corn stalks and shucks about fifteen yards out front. As usual, a second shot was required to bring the big guy down. Even then, only one #2 pellet hit a wing. The pheasant was running before he hit the dirt. I said, "Brownie" (her command to retrieve) just as the bird's wing folded, and in a spray of corn husks, off she went. The freshly picked field afforded Damon and me a clear view of the chase and retrieve that followed. It took Brownie at least fifty yards to catch up to the bird. The pheasant cut to the right just in front of the charging Boykin, but Brownie was able to adjust with a leap to the right and hit the bird broadside. Both pheasant and dog went head over heels. The bird came up first and headed back in the direction from which it had come. Brownie, after her complete somersault, was up and off again in hot pursuit. Forty yards later and after two more zig-zags, she had the ringneck in her mouth, his spurred legs kicking and wings flapping. With that wonderful way spaniels have of shaking a tough bird into submission without damaging the table fare, Brownie quickly quieted the cock and returned to my side. I swear that dog had a grin on her face as she looked u at me waiting for my "give" command.

For spaniel people who don't know Boykins but have worked with American Water Spaniels, Boykins are the small cousins of that beautiful do-it-all hunter. The Boykins' strong suit is retrieving. Many South Carolina folks use them exclusively for dove and duck hunting. However, when used as flushing spaniels as well as small retrievers, these little guys realize their full potential. Our hunt in South Dakota could not have been more enjoyable. I can't imagine a better dog for those crazy running birds. The little girls slept long and hard each evening but were always jumping to go in the morning. We arrived in South Dakota as beginning freshmen. We left five days later as upper-classmen. Come next November two little yellow-eyed, liver-colored Boykins and I will be attending class in pheasant through those same fields again. I can't wait for school to begin.

Howard Nichol was born outside Evansville, Indiana. He was a Navy pilot during Vietnam and at 52 years old, is a Boeing 767 Captain for American Airlines flying out of Miami to South America. As a young man he hunted with beagles, but Dolly and Brownie are his first work with spaniels. Catherine helps with the retriever training. Both Howard and Catherine look forward to the second off-season with the two dogs attending UKC Hunter Retriever Club-hunt tests and the annual Boykin Spaniel Society's National Hunt test in South Carolina.

You can reach Howard by e-mail at: boykins2@aol.com

To be a part of the Original Boykin Spaniel pages, contact Pam Kadlec:
pam@boykinspaniel.com