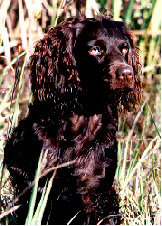 Reprinted, with permission, from the Boykin Spaniel Society

The Boykin Spaniel carries a unique set of credentials that no other breed of canine can honestly claim. He is a dog originally bred by South Carolina hunters. He was developed initially as the ideal dog for hunting wild turkeys in the Wateree River Swap during the early 1900s and now beautifully adapts to the dove fields, the duck marshes and the homefires of his modern-day masters. Most individual Boykin Spaniels have a special personality and enthusiastic field ability that no other dog can match.

A Boykin Spaniel is unmistakable, if you know what you're looking for. He is a little brown dog with a spaniel's flop ears and a deep liver-brown coat, bleached to reddish fringes by the sun. Backwoods legends has it that the spaniel's brown coat was bred-in to provide the dog camouflage as he lay nervously on the floor listening to his master call a turkey in. The docked tail came as a man-made modification to keep a long twitching tail from rattling leaves in a turkey blind. He is larger and rangier than a Cocker and his coat doesn't have all the fancy feathering around the edges. His most outstanding feature, however, is a super-energized personality that adds an extra special twist to the usually mundane chores.

The much circulated story of the where the first Boykin Spaniel came from is simple and without frills. It says that some time shortly after the turn of the century, a small dog was found wandering near a Methodist church in Spartanburg, S.C., and one of the people attending services there, a Mr Alexander L. White, took the dog home as a pet.

The dog apparently displayed some aptitude that might be useful in hunting, so Mr. White then sent the dog by train to his hunting partner, Mr. L. Whitaker Boykin of the Boykin community just outside Camden, S.C.. With the training know-how of Mr. Boykin, this little stray soon developed into a superb turkey dog and waterfowl retriever.

According to best accounts, the dog was a male, the forerunner of all the Boykin Spaniels in existence today. Other early ancestors of the Boykin are reported to be the Chesapeake Bay Retriever , English Springer Spaniel ,Cocker Spaniel, and the American Water Spaniel.

The fertile crescent of the Boykin Spaniel breeding must be recorded as the rural communities near Camden, Sumter and, of course, Boykin, South Carolina. These spaniels can be found today throughout the United States with a higher concentration on the Atlantic Seaboard.

The Boykin Spaniel Society was founded in the summer of 1977 after several previous attempts over the past thirty years to form some type of club for the perpetuation of the Boykin Spaniel.

Peter B. McKoy, a Camden veterinarian, became concerned that the Boykin Spaniel was becoming endangered due to indiscriminate breeding, so he contacted three descendants of L.W. (Whit) Boykin, founder of the breed. As a result the Boykin Spaniel Society became a reality.

Within the first year the Society had over 300 members from 25 states. A Boykin Spaniel Registry was begun in 1979.
Objectives of the Society are:

a) to encourage and promote the breeding of purebred Boykin Spaniels and to do all possible to bring their natural qualities to perfection;
b) to urge members and breeders to help establish standards by which the Boykin Spaniel can be judged:
c) to do all in its power to protect and advance the interests of the breed by encouraging sportsmanlike competition in field trials:
d) to maintain records on all Boykin Spaniels in order to form a Boykin Spaniel Registry.